for Rock Band and Wind Ensemble 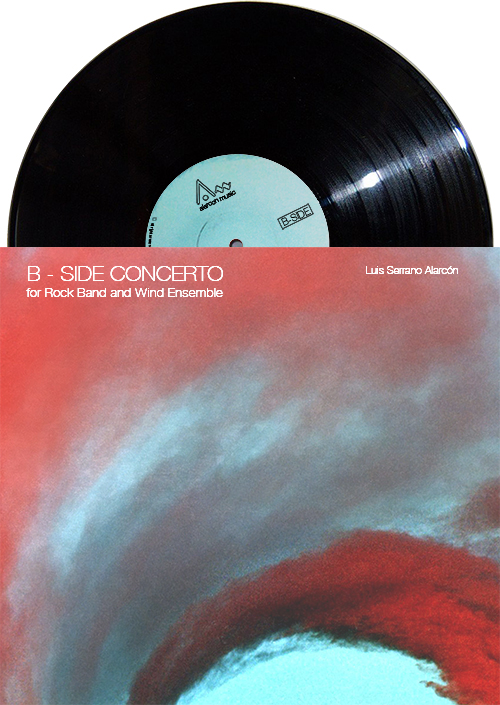 B-Side Concerto, an unclassifiable piece, is born from the necessity shown other times by the composer, of combining elements from different musical traditions. In this case, a rock band (electric guitar, electric bass, keyboard and drums) is the main element which converses or confronts the symphonic ensemble. The intention of the composer is not making Symphonic Rock but the opposite: integrating the tools from other musical styles for getting his own language, an unequivocal personal expression. The piece, divided into three parts without internal pauses, features two main superimposable motifs (a and b), which appear transformed during the whole work:

These two motifs are especially used on the second and third Modes of limited transposition. This modal use, combined with the timbre of the rock band, gives the group a mysteriously seductive sonority.

The first part of the piece is divided into two sections. First of them, in medium tempo, introduces and repeats the two motifs in several ostinati which drive the music to a first climax prior to the first apparition of the electric guitar, which is the undisputed leader during the whole piece. The second section, which is frenzied and very virtuous, is characterized of the distorted sounds of the solo guitar:

The second part begins with an introduction in which appears a new variant of the b motif. This variant is exposed twice, in imitative form: first of them played by the tuba and the second time by the electric bass and the Hammond organ, which is one of the most characteristic sounds of this part. After this introduction, the only one theme of the piece, with an obvious blues essence, is introduced by the guitar:

After a brief and tranquil transition, the theme is recapitulated brilliantly by the saxophone section. In the end of this theme, a chromatic cell (c) which appeared sometimes accompanying the theme, becomes suddenly into the main element that, under an accelerando, drives the music to an important development section.

In this new section, the c cell is used as the head of a soggetto with which the composer makes a fugato with five entries. In the end of the brilliant fifth entry, the same c cell is transformed to an obstinate groove upon which the soloists make a large improvisation. The second part of the piece ends with a free last exposition of the theme played by the tenor flute. This melody is splashed by some interventions of the solo guitar with delay effect which announce, using the first three notes of the b motif, the imminent arrival of the third part.

The third part is basically a recapitulation of the first one, but with important differences. In the first section, in medium tempo, the melody of the solo guitar leads the group, while the second one is now a big transition for connecting the final Coda. This last section, written in a style close to the Hard Rock, is built with a variant of the beginning of the second part which is repeated some times around E, which is main tonic of the whole piece. With a frenzied succession of 16th notes in parallel motion of octaves which drives until a blunt E the work ends definitively:

This website uses cookies to improve your experience while you navigate through the website. Out of these, the cookies that are categorized as necessary are stored on your browser as they are essential for the working of basic functionalities of the website. We also use third-party cookies that help us analyze and understand how you use this website. These cookies will be stored in your browser only with your consent. You also have the option to opt-out of these cookies. But opting out of some of these cookies may affect your browsing experience.
Necessary Always Enabled
Necessary cookies are absolutely essential for the website to function properly. This category only includes cookies that ensures basic functionalities and security features of the website. These cookies do not store any personal information.
Non-necessary
Any cookies that may not be particularly necessary for the website to function and is used specifically to collect user personal data via analytics, ads, other embedded contents are termed as non-necessary cookies. It is mandatory to procure user consent prior to running these cookies on your website.
SAVE & ACCEPT

Woodwind (Bands A and B)

Brass (Bands A and B)

(*) There is English Horn part only in second movement. It can be performed by any of the oboe players, from Band A or B.

(*) Only one Marimba is needed